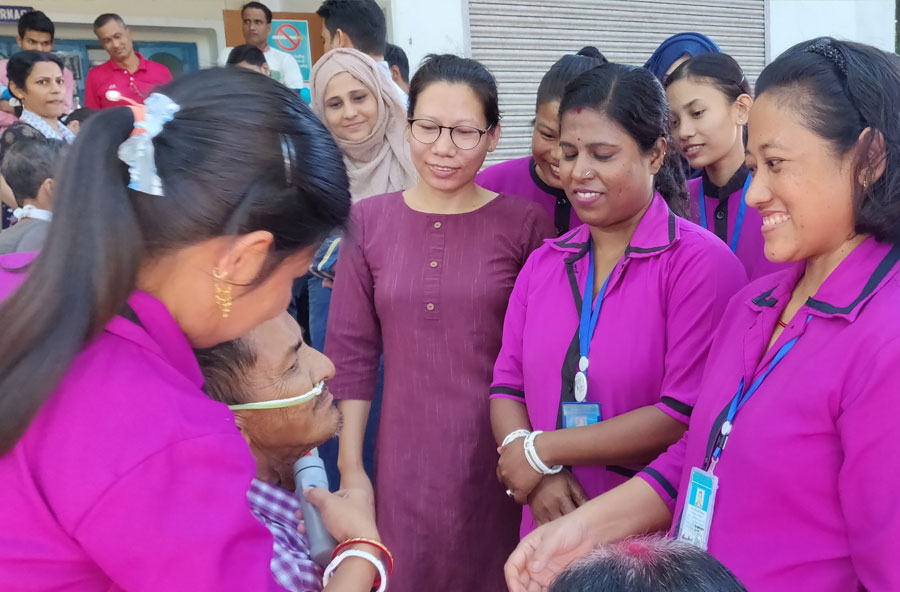 For those in the Indian mainland, culturally and geographically, the Northeast often refers to the sprawling state of Assam.

For a long time, even my exposure to this less often visited part of India was restricted to Assam with an isolated trip to Shillong once as a guest speaker. My curiosity to explore this most eastern part of our country has been dormant since that winter morning when the now defunct Indian Airlines took me on a jolly ride from Guwahati to Dibrugarh before depositing me at my destination- Kolkata. I was travelling in the opposite direction of where I was headed and spent most of the journey grumbling, until the moment when the unforgettable vista of the majestic Himalayan range unfolded, the morning sun giving it a pristine glow. I watched mesmerized from the window seat of a nearly empty aircraft.

My wish list finally got fulfilled last month when I visited Eastern Assam and the picturesque state of Mizoram.

The first part of my visit was to the Cachar district.

With Tripura and Bangladesh to the West, Manipur to the East and Nagaland beyond, Meghalaya is to the north and Mizoram to the south of Cachar. Bengali is spoken more widely here than the state dialect, Assamese and not surprisingly most signboards happen to be in Bengali.

I visited the Labac Central hospital where Sir Ronald Ross, the Nobel-prize-winning pathologist for his discovery of the malaria parasite had worked briefly and peeked into the very microscope he had used; in perfect working condition even after a hundred years.  At Rosekandy I was taken on a tour of the tea factory to observe the process by which the tender, green leaves I had just seen at their tea plantation turned into the packaged tea that we drink with relish. The visit concluded after a sip of the most expensive tea in the world, the Golden leaves selling at a lakh of rupees per kilo.

But the primary purpose of my trip was to visit a cancer hospital there.

The Cachar Cancer Hospital and Research Centre (CCHRC) at Silchar is an independent, private initiative of the Cachar Cancer Society; a group of forward-thinking philanthropists of Eastern Assam. It started with the idea of providing cancer treatment to the local population who otherwise had to travel to Guwahati, 200 miles away.  Lacking manpower and infrastructure, the 30-bed hospital received a new lease of life when in 2007 Dr Ravi Kannan, a surgical oncologist from Chennai decided to move to Assam with his family and take over its running and management. With support from his wife Seetha,  Dr Kannan ran the centre single-handedly, begging and borrowing funds from the locals through the good offices of the members of the Cachar Cancer Society; before two surgical oncologists, Dr Poulome  Mukherjee and Dr Ritesh Tapkire joined him.

In fifteen years Dr Kannan has transformed this decrepit hospital into a top-notch multi-disciplinary cancer centre capable of providing comprehensive management for all types of cancer. The hospital now boasts 110 in-patient beds, a modern fully-equipped operation theatre, and an ICU with ventilators managed by Cloud critical care physicians, labs, surgical onco, medical onco, radiotherapy departments and other supporting para-clinical disciplines. A full–fledged nuclear medicine department with PET-CT scan and a Linear Accelerator is in the process of installation.

All patients who come for treatment receive the same care irrespective of their financial background. No distinction is made between the rich, middle-class or the poor. All are treated with the same degree of care and compassion. A unique concept the hospital practices is of providing ad-hoc employment within the hospital premises to the attendants of the patient thus ensuring that they continue to be productive even as their family member is undergoing treatment. Many other innovative ideas have been developed to ensure that patients receive seamless care despite having no financial support and within a short period, the hospital has become recognised as a major referral centre for cancer patients from all the surrounding northeastern states.

The strength of this remarkable institute lies in the nurses, literally and figuratively.  Helpful, smiling and jovial, from the OPDs to the wards to the ORs and ICUs – they manage the show. Always with the patients, they are hard-working, intent on patient care and follow instructions of the doctors diligently. I had a personal interaction with some of them having given a specific post-op instruction not routinely followed there and despite the language difficulties was amazed to see that everything was followed to the hilt. There was an enthusiasm to learn whether there was anything more they could do to help their patients.

I also visited one of their community outreach programs. Dr Subhadra runs the Preventive Oncology unit conscientiously and is a key factor in the institute being able to focus on this neglected aspect of health care. Essentially a cancer-based intervention, it also attempts to focus on other preventive health issues the rural population is struggling with. This has earned the goodwill of the local communities and also made a genuine difference in public health care in the area.  Cancer-screening programs in general tend to be used as promotional gimmicks by private hospitals and while they do pick up a few early cases, the overall impact of the time and effort spent is only justified if you can simultaneously educate the public on diet, hygiene, family planning, immunization and education.

The USP the institute believes and practices – affordable, accessible and equitable health care; can be a game-changer in the delivery of cancer treatment to the vast majority of the rural population of the country and Dr Kannan has shown that one person can make a difference.